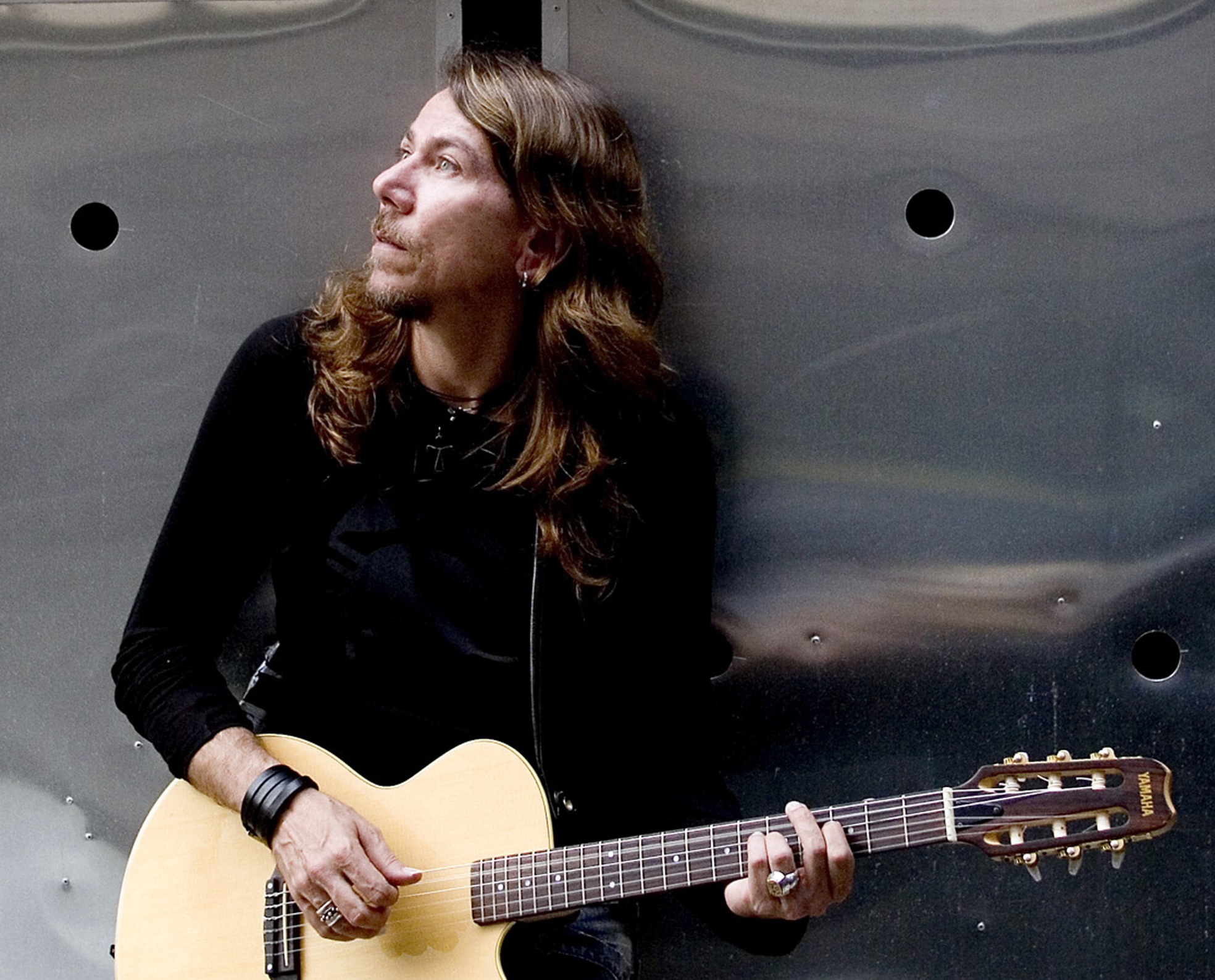 Ever since Antonio Carlos Jobim came north to record with Frank Sinatra in the 60s, artists like João Gilberto, Caetano Veloso, and Gilberto Gil have carried the legacy of MPB – the acronym for “Brazilian Popular Music” – to a global audience.  Recently a younger generation has cemented Brazil’s place as a superpower in the music world.

But Brazil, we now learn, has been holding out on us: with Lenine, Americans finally have a chance to hear the man who virtually swept Brazil’s annual TIM awards last year, winning “Best CD,” “Best Male Vocalist” (both in the judges’ voting and the separate fans’ poll) and “Best Song,” plus two Latin Grammys on top of it all.  With his husky voice and irresistible blend of MPB, rock, hip-hop, and traditional music, Lenine (pronounced Leh- NEE-nee) has been called Brazil’s answer to Prince.  His songs have been recorded by Milton Nascimento, Sergio Mendes, even Dionne Warwick.  But until now, he has been just a rumor to most American fans.  Lenine’s self-titled US debut, culled from three remarkable Brazilian releases, and his stunning turn at the recent 2006 South By Southwest Festival, show that rumors can sometimes be true.

He was born Oswaldo Lenine Macedo Pimentel, but like his soccer-playing countrymen, he found that if you do something well enough, one name is all you need. Listening to Lenine, the mind (or maybe it’s the music) begins to play tricks on you, and you’re suddenly hearing echoes of Ry Cooder, Beck, Silvio Rodriguez, Stevie Wonder, Massive Attack, even the Beatles.

Lenine announces himself right away, starting the compilation with the sounds of acoustic guitars over the distant pounding of drums, and leading into the effortless funk of “Jack Soul Brasileiro.” His rhythmic singing blurs the boundary between song and rap. A break featuring traditional forro accordion and maracatu drums from northeastern Brazil is embroidered with brief electric guitar power chords.  The song reflects Lenine’s own roots in the city of Recife, one of Brazil’s oldest and most diverse cities. Recife has a rich cultural mix of African, Portuguese, Dutch and other European traditions mixed with distinctive traditional music forms and rhythms. “To reflect on my surroundings has always been my goal,” he says.  “Pop and samba, rock and the Brazilian maracatu, the popular and erudite, analog and digital, they are all tools I use.”

Some of the most striking pieces on Lenine are the works that take a particularly Brazilian approach to electronica.  Lenine refers to “O Dia Em Que Faremos Contato” as “retro-futuristic science fiction.”  A subtle tinge of electronica floats beneath what otherwise sounds like easily recognizable MPB, adding an unexpected hue and an aura of mystery.  Science fiction also lurks in the background of “O Marco Marciano,” where the simple, appealing mix of acoustic strings, electronic processing, and distant synth drones suggests some kind of brain-twisting collaboration between the legendary Brazilian mandolinist Jacob Do Bandolim and the Bohemian electropop of CocoRosie.

Of course, Lenine couldn’t reach the stature of national hero in a music-crazy land like Brazil without attracting some international attention.  Among those paying attention was the NY Latin-funk collective Yerba Buena, who appear on “Rosebud (O Verbo E A Verba),” a song that seems to exist in a time warp of 1950s Latin pop, 1970s New York salsa and 21st-century post-drum’n’bass production.  The groundbreaking band Living Colour plays on Lenine’s “O Homem Dos Olhos De Raio X” – a psychedelia-laced, R&B-based take on the cult film The Man With The X-Ray Eyes.  (It was recorded, he tells us, in one take with no overdubs.)  It may be the most conventionally “pop” sounding tune on the album – but that’s using the words “conventional” and “pop” pretty loosely.

“Nem O Sol, Nem A Lua, Nem Eu” features the gifted jazz trombonist Steve Turre, who might be best known as part of the Saturday Night Live band, but who has for years made music with conch shells.  “A cyber-punk ‘Ring Around The Rosy'” is how Lenine describes this lovely, languorous ballad – its faint, twittering electronics and muted seashells “taking this song to remote sandy beaches… in Saturn!”  Another organic sound turned on its head is the Brazilian berimbau, a percussion instrument that looks like an archery bow with a coconut shell at one end.  The American-based Brazilian percussionist Nana Vasconcelos, who also appears on Lenine, has made this sound somewhat familiar to jazz and world music fans, but on “Tubi Tupy” Lenine multitracks the instrument and turns it into a kind of one-string funk guitar.  Add trip-hop rhythms and electronic programming, and you get what Lenine refers to as “the genetic code of the racial mix found in Brazil.”

The sounds of the African diaspora – the bluesy guitars in “Na Pressaõ,” the samba drums on “Lavadeira Do Rio,” the high-octane funk of “A Rede,” even the rap-rock of “Alzira e a Torre” – all coexist peacefully and musically on Lenine.  While it may be Lenine’s American debut, this is clearly an artist whose vision has been fully formed.  And a wide vision it is:  “Paciência,” the album’s closing cut, starts out like a lost track from the Beatles’ Revolver.  But perhaps the most telling artistic statement on the record is also the quietest one: “Distantes Demais,” with its acoustic guitar, accordion, and voice, recalls old-fashioned café music.  Coming from a master of multicultural, genre-busting MPB, you can practically hear Lenine saying, if I’d been born before all this, I’d still be writing songs.  And you’d still want to hear them.