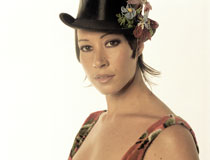 One is more than simply the title of vocalist Dierdre Dubois‘ debut solo album: It’s also a bold statement of motivation and intent. After a decade of collaboration with the ambitious, far-reaching world music ensemble Ekova, One marks Dierdre’s emergence as a solo artist making her first creative statement. The album title also symbolizes her singular control over every aspect of the album. “I’ve given myself the freedom to work with different people,” she explains. “I called all the shots on this album; I decided with whom I was going to work, and I oversaw the production. And I’m lucky enough to have found partners who supported me in the choices that I made.” That singular vision is echoed in her decision to release One under her first name only.

As a member of Ekova, Dierdre had come to worldwide renown for her imaginative, wordless vocal flights of fancy, set against music that combined old-world textures with new-world technology, bridging the gaps between ancient and modern, East and West. “After ten years of working in a band situation, we’d all grown in different directions,” Dierdre says of Ekova’s split. “We’d all been really focused on thisone project for a long time, and we’d learned a lot from each other. But we’d all matured, and the time had come for each of us to try something new, something more personal.”

For Dierdre, creative freedom provided the opportunity to wholeheartedly embrace the electronica that had gradually become an important part of Ekova’s eclectic musical mix. In a sense, it was actually a return to her roots: “Before I came to Europe, I was a Goth hippie!” she explains, laughing. “I was clubbing three times a week, if not more, and just dancing. Then when I started making music, I just gave myself completely to it. And now, making more danceable music and being onstage with electronic music, I’m dancing more and more. I feel like I’m going back to being more myself. And electronic music is really part of who I am, even though I set it aside for a while to learn other things.”

Where her earlier songs were often born from a spark created with acoustic guitar or cello, on One, Dierdre generated much of her material with sequences she developed on a computer. “I did a lot of the programming myself,” she says, noting that the writing process itself was actually much the same. “It always starts as something very simple and minimal, with a lot of space. For me, that’s the ideal situation for composing vocals.”

Dierdre’s primary collaborators on One, Wayne Frost and Christian Ricau (a.k.a. Cricket), both come from the world of electronica. The Canadian-born Frost, a longtime New York resident now based in Paris, has worked as a sound designer for live theater and television, and performs in Cartesian Lover, a music and video project with vocalist/visual artist Elizabeth Tesla. Frost contributes his programming expertise and guitar work to One. Cricket is a leading figure in the emerging generation of French electronica artists. Since 1995, he’s fronted European bands such as Solom Atooa, Starbilux and Atomik Election. Cricket is also currently involved with the production and technician crew at “Movin’ Up” Studio where he works with top dub and dancehall artists Gom, Layone, Sweety and Jammadom. Additional collaborators on One include former Ekova partner Mehdi Haddab and Six Degrees recording artist Karsh Kale.

Setting One still further apart from her previous work and making it even more personal, Dierdre also decided to emphasize songs with lyrics, in both English and French. “Firefly” exudes the terse, breathy sensuality of vintage Prince, while “Sweet and Sticky Perfume” bumps and rumbles under Dierdre’s sly, seductive narration. On “A Maid in Love,” she thoroughly recasts a traditional folk ballad as a dubby trance number in collaboration with Kale. “That’s a song from the folk music that my mom listened to when I was a kid,” she explains. “It’s originally very Irish-sounding; I turn it into a much more jazzy melody that I have a lot of fun with. That’s one of my favorite songs to do live, because we put a lot of drum’n’bass into it and everyone just gets up and dances!”

Dierdre opened her heart and poured out her innermost feelings to especially dramatic effect on a trio of songs: “More Than the Ocean,” “Thoughts of You” and the album closer, “One of Your Smiles”:

“Those three songs were inspired by a really close friend who I lost to cancer,” Dierdre explains. “I’m glad that I was able to say something beautiful for her, because she was a really beautiful person.”

Even with the appearance of lyrics on One, Dierdre remains firmly committed to the fanciful free vocal flights her fans have come to love. On “Waiting for Spring,” the album opener, she alternates between a few urgent, suggestive lines and free vocalization. The stately “B.A.C.H.,” colored with ancient instruments and based on a melody by the great Baroque composer Johann Sebastian Bach (who composed the original tune using only the four letters of his name, thus the title), features Dierdre’s improvised vocals, as do the funky “Close to Us” and sultry “A Way to Love.”

“I want to be in music to make people feel good, relaxed or joyous, but I don’t necessarily need to be telling them how to feel or what I think in order to do that,” she explains, then adds with a laugh, “There are definitely enough people doing that to go around! I will probably keep writing lyrics, but I will also keep singing without them, because the abstract is a really interesting landscape to work on.”

Two cover songs complete One, both of them revealing a little bit more about Dierdre. One, the familiar Moody Blues hit “Nights in White Satin,” is stripped of its orchestral bombast, and reinvented as a hypnotic, minimal trance number based on a bluesy riff the singer first developed on cello. “It’s very different from the original version, and that’s what I like about it!” she says. The other cover tune here, “Lolita Nie en Bloc,” might be unfamiliar to non-Francophiles; the song comes from Noir Desir, one of France’s most legendary rock bands. “Ever since I’ve been in France, I’ve heard about Noir Desir,” Dierdre recalls. “And when I finally saw them onstage, I just went, wow, I get it! I’ve lived here for 14 years and was looking to do a song in French, and I chose this song because the text is really beautiful. I had a lot of fun with that one, and actually did the programming on it.”

With her album completed, Dierdre is looking forward to taking her new music out on the road. “I’ve already started working on the show, which is going to combine electronics, vocals and video,” she says. “Patrice Mugnier, who did the “Waiting for Spring” video, is working on several other videos for me, and we’re putting together an hour of video for the show. I’ll be on tour with Wayne Frost and hopefully Cricket as well. I’ve already done a few shows, and it’s been a lot of fun.”

Summing up her current state of mind, she adds, “I’m having a lot of fun, I’m meeting a lot of people. And it’s like a kind of musical community—I’ll do some vocals for you, you do a remix for me. It’s about meeting people and sharing.”