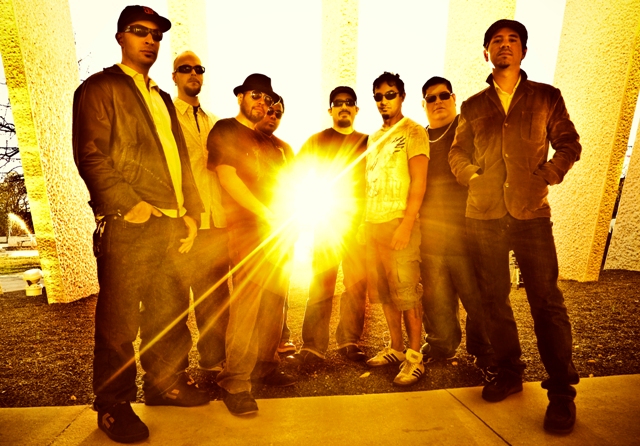 If ever a band could boast having a complex genealogical tree, that band is Brownout. The eight-piece, Latin funk ensemble based in Austin, Texas, is both offspring and germinating seed to Grammy-Winner Grupo Fantasma. The latter in turn traces its roots to when Austin based Blue Noise Band and The Blimp, from booming border town of Laredo, Texas, converged in its conception.

Brownout may well be Grupo Fantasma’s psychedelic Latin funk little brother, an offshoot of the collective that regularly backs Prince, its latest incarnation, or even its alter ego. What they are not is the sprawling conjunto’s side project. Brownout has taken Grupo Fantasma’s funk roots and blown them up. In the process they’ve taken on a life and developed a unique sound all their own. Aguilas and Cobras, the group’s latest album on Six Degrees Records, stands as testament to their one of a kind evolution.

The band member’s musical journey began as a revolt against the Mexican cumbias and Tejano music of their parents. Opting instead to immerse themselves in the worlds of Sly Stone, James Brown, and Mandrill, they were nurtured by soulful staccato drums, deep-in-the-pocket guitar riffs, and bawdy bass lines, elements that would provide the overriding arch for their sundry musical explorations. Eventually they migrated out of the garage and flocked four hours north into Austin’s thriving music scene. Away from home they embraced their Latino heritage and as Grupo Fantasma they explored the cumbia rhythms they shunned as teenagers.

Playing over 150 shows per year, including backing Prince at Coachella and on the “Tonight Show With Jay Leno,” Grupo Fantasma has performed in eight countries, in music festivals such as Bonnaroo and the New Orleans Jazz Festival, and played for U.S. troops stationed in Kuwait and Iraq. Somehow they even found the time to release a Grammy-nominated full-length, Sonidos Gold.

Then came Brownout, a return to their coming of age forays into funk. Mostly instrumental, the band takes its cues from James Brown’s J.B.’s and San Francisco’s Malo, the Seventies act fronted by Carlos Santana’s brother Jorge, but they infuse it with their particular vibe of border music hybridity and generous brushstrokes of trippy psychedelia.

“It’s funny because we can be rehearsing with Grupo Fantasma one night and then the next night the same group of guys can go back to the rehearsal room and rehearse as Brownout and the music is completely different,” Guitarist Adrian Quesada says.  “We’ve been lucky enough to be performing sometimes, where there’s a whole audience that’s not even familiar with Grupo Fantasma when Brownout is playing and vice versa. We’re definitely trying to keep the two separate. At the same time there’s no point in trying to hide the fact that it’s the same band.”

With soulful backbeats, psychedelic exploration, tough grooves and brassy streetwise accents, Brownout can already claim the kind of bona fides needed to stand on their own. 2008 saw the release of the crew’s critically acclaimed debut album Homenaje, on the influential UK label Freestyle Records. Three years in the making, the album is a nod to the group’s musical influences, hence the name, which means homage in English. To Brownout’s surprise Homenaje became a cult-favorite and sparked the attention of international DJs, tastemakers and fans of cutting-edge music. The Austin Chronicle called it “the sleeper hit of the year” and lifestyle magazines such as Wax Poetics stated, “Brownout has elegantly bridged their multiple musical universes,” while XLR8R touted, “A band like this restores faith that all may not be lost…If this doesn’t get the party started, y’all must be D.O.A.”  Even the online urban authority Okayplayer weighed in, “Reverence for the music of the Latin diaspora equal to that for dusted Funk, Soul, Jazz & Rock.”

To cut their sophomore effort Brownout wasted no time and rode the unstoppable wave of momentum right into the studio.  Band members hunkered down this past winter to record Aguilas and Cobras, a fifteen-track disc that’s as dynamic as it is expansive. Brownout recognized their funk forbearers on Homenaje and on Aguilas and Cobras they’ve deftly avoided the pitfalls of being trapped in retro revival formulas. The new music is an adventurous amalgam of psychedelic haziness, anchored by the driving percussion of Afro-Latin-funk and vocal arrangements inspired by psychedelic Motown arrangements like The Temptations.  Brownout decided to purposefully omit the typical funk growler, opting instead for the unexpected vocal guest.

“With this particular record we tried to take it in different directions trying to use vocals and certain things on the songs that you wouldn’t expect on a funk song or on a Latin funk song,” Quesada explains. “Almost every tune with vocals on it was trying to really take the music on a wide left turn. We feel like we’ve already paid homage to the music before us and all of our influences and now we’re really trying to see if we can actually take the music somewhere and put our own stamp on it.”

The album opens with “Con El Cuete,” a song about Laredo, as a microcosm for the U.S. – Mexico border. (Cuete is a slang term for gun). Filled with double-entendres that touch on the realities of drug-cartel related violence in the region and the media’s sensationalism in covering only the negative aspects of life on the border, the song has an up-tempo groove punctuated by percolating Latin percussion, a hustling horn section, and electric guitar. “Unfortunately our home town and our culture and the country that we came from, the only time you hear about it in the news is when somebody’s dying,” Quesada says. “You would never know that it’s a very vibrant culture that’s worth a news story in itself.”  Brownout tapped James Petrelli from White Denim, adding a psychedelic multilayered vocal arrangement to the chant group style vocals in vogue with 70s Afro-Latin funk bands.

The title-track, “Aguilas and Cobras,” depicts a mythical fight between a cobra and eagle, both of which happen to be illustrated on the Mexican flag, is a high-energy workout of jousting horns, hypnotic guitar riffing, and stuttering drums.  One of the album’s sparkling gems is “Tell Her She’s Lovely,” a cover tune by late 60s, early 70s west coast outfit EL Chicano. The song epitomizes Brownout’s cunning ability to take something from the past and breathe new life into it. Featuring Rene Villanueva of San Antonio band Hacienda on vocals, the song is revived by a hazy yet smooth approach, resulting in a sound that’s heavenly and uplifting.

Inspired by the documentary Man on Wire, “Framed by Death” feels like your standing on a sonic precipice, pushed to the edge by fired-up congas and slivers of baritone sax.  Half way through the disc “The Flea” offers a deft, percussive interlude with faint background rumblings of fuzz guitar. It sets the mood for “Slinky” a sensuously supple track written by Beto Martinez that has more of a late 70s, Parliament Funkadelic sound, fused with electric-guitar stabs and brass-fueled injections.  On “C-130” Quesada had his neighbor Peter Stopchinski of the Golden Hornet Project, an arranger and composer of everything from classical to punk music, arrange the cinematic strings accompanying the tune. Titled after military transport aircraft, the kind Grupo Fantasma rode on trips to Iraq, band members were inspired by the intense experience of being transported on these planes and the trip in general.  “It was sort of a bitter sweet experience,” Quesada relates. “The tune lends itself to a little bit of orchestration which again goes back to a lot of the more psychedelic, soul stuff.”

“Chanclas de Ninja,” (Ninja Flip-flops) has a cheeky, cinematic feel. Brownout’s ability to conjure up images from sounds is once again demonstrated on their brooding finale, “S.F.L.A.” the last thread to complete the band’s trippy tapestry.

Asked if he foresees any future metamorphoses, Quesada seems resolute that for now they’re keeping the sonic circle tightly closed. “Grupo Fantasma is sort of the mothership and we all kind of came from that,” he says. “So everybody does double duty in both bands. We don’t really have that much time for other projects anymore.” 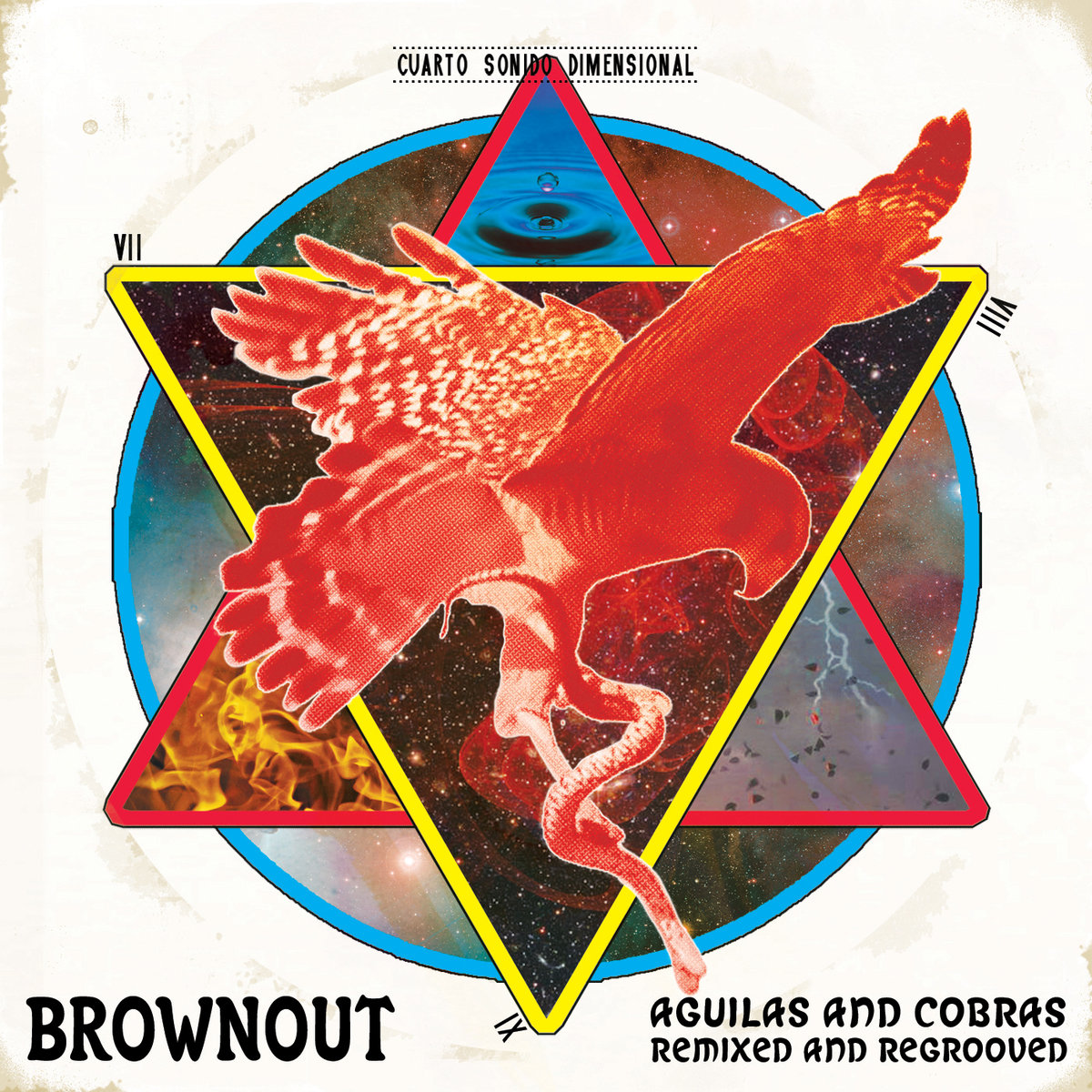