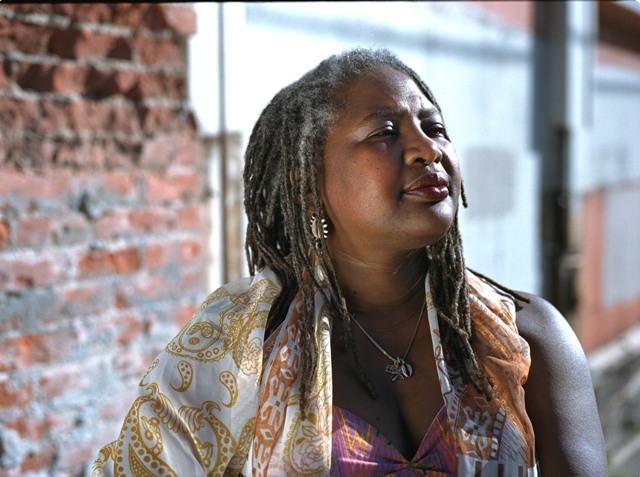 Bobi Céspedes possesses one of the most powerful, poised, and elegant voices in the world, and Rezos, her solo debut on Six Degrees Records celebrates her arrival. The Cuban-born singer, percussionist, and Yoruba-Lucumi priestess carries on a centuries-old tradition of Afro-Cuban singing and drumming.  On her long-anticipated solo album Bobi Céspedes combines that ancient, elemental sound inflected with contemporary dance grooves.  Bobi’s deep, rich voice – one of the most distinctive on the international stage – and her ear for contemporary Latin, jazz, and dance music, combine to make Rezos a new record with an old soul.

Bobi’s work with Mickey Hart’s Planet Drum & Bembé Orisha bands has brought her to wider attention in recent years, but Bobi’s musical roots run far deeper.  Gladys “Bobi” Céspedes was born in Cuba and emigrated to the States in 1959. In 1967 she was initiated as a Yoruba-Lucumi priestess. She now lives in the San Francisco Bay Area where she maintains a rigorous schedule of concerts, religious rituals, and travels lecturing at the university level.  In the 1980s, she co-founded the 12-piece Conjunto Céspedes, which combined the traditional poetry and nuances of Cuban music with modern horn arrangements and has since become one of this country’s most groundbreaking and contemporary Latin bands.  All of this background comes together in her new full-length release.

Rezos is not only a benchmark recording for this world renowned singer, it is a study in musical alchemy – with Latin jazz riffs interacting with club oriented drum loops; and electric guitar breaks punctuating traditional call-and-response vocals, all seemingly organic.  The rhythm tracks float like the Caribbean breeze from reggae/soca grooves to traditional cha-cha but the glue comes from the deep rhythmic power of African Yoruba ritual, passed down through the centuries by Cuba’s people of African heritage.  Each of Bobi’s new songs encompasses the traditional wisdom of a centuries-old folk song or prayer.  Of course, having a top-drawer band helps too.  With producer Greg Landau, who’s already worked his magic on albums by world music heroes Susana Baca, Quetzal and “Patato” Valdes, Bobi has assembled a gifted crew.  Pianist/flutist Oriente López is one of Cuba’s top arrangers (with everyone from Silvio Rodriguez to Paul Simon), and does most of the arrangements on Rezos.  Cuban percussionist Nengue Hernandez, who also played with Planet Drum, unleashes a battery of bata drums, congas, timbales, and other percussion instruments.  A little East Oakland hip-hop creeps into the mix, too, courtesy of drum programmer One Drop Scott and electric bassist Rahsaan Fredericks.  And as if that weren’t cosmopolitan enough, mixers Donal Hodgson and Garry Hughes add some subtle touches of British electronica. 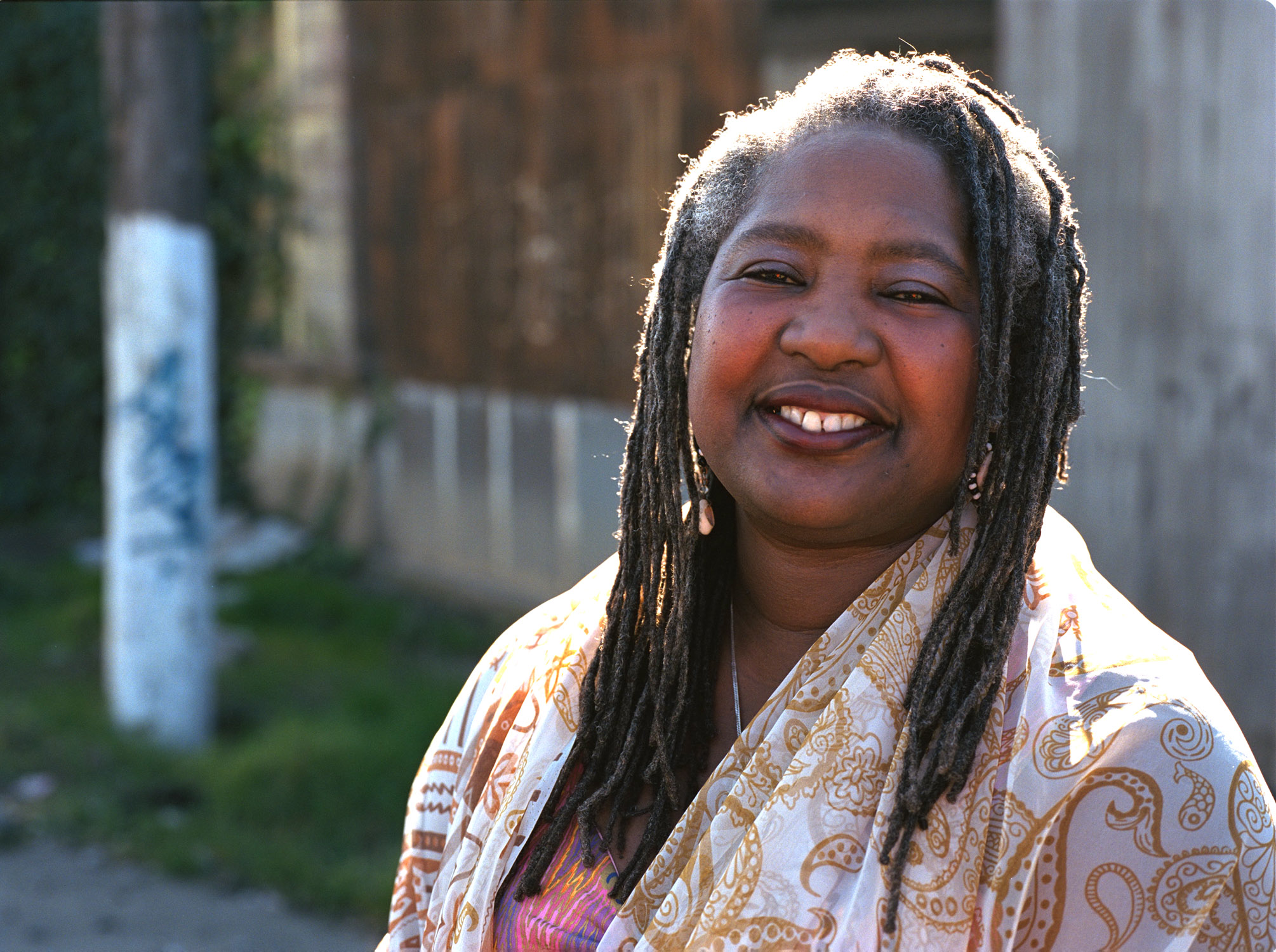 There is no mistaking Bobi’s heritage. She starts right off with the album’s title track, “Rezos,” a traditional-sounding Yoruban chant, invoking the orishas, or deities of the Yoruba religion.  The arrangement uses the sound of Cuban son, the musical fusion of African rhythms and big band jazz and propelling the whole thing forward is a locked-in rhythm section of Afro-Cuban drums and down home Oakland funk.

A Yoruban priest or priestess is consecrated to a particular orisha, and in Bobi’s case, that deity is Obatala.  Her song “Obatala” is a modern but still deeply-rooted take on Yoruba prayer, that combines several West African musical traditions complete with jazzy piano breaks and funky electric guitar.

There are many subtle musical surprises along the way. On “California,” the call-and-response vocals and ensemble playing is briefly visited by Indian sitar and tabla break.  And touches of electronica gently offset the telling use of triangle, flute, and piano in the title track.

Some of Bobi’s other songs are even less obvious in their blend of old and new. On “Awoyo,” the rhythms are traditional, and are played on timbales and congas. These traditional Afro-Cuban instruments interact with a modern dance groove that fits seamlessly into the percussion ensemble.  The music has a contemporary sound while reinforcing the ancient Yoruban rhythms.

Rezos concludes with one purely traditional song, “Ogun.”  This Yoruba invocation to the deity Ogun is presented in pure call-and-response vocals accompanied by traditional Afro-Cuban drums.  By putting it at the end of her album, Bobi seems to be saying that the roots of this music are as strong and powerful as ever.

Musical acclaim has come late for some of the greatest voices – think of Susana Baca for example, or Cesaria Evora, two other singers whose earthy voices and cultural significance suggest long traditions of music and spirit.  Now, with Rezos, it’s Bobi Céspedes’ turn to take center stage as one of the most distinctive and compelling voices in the world. 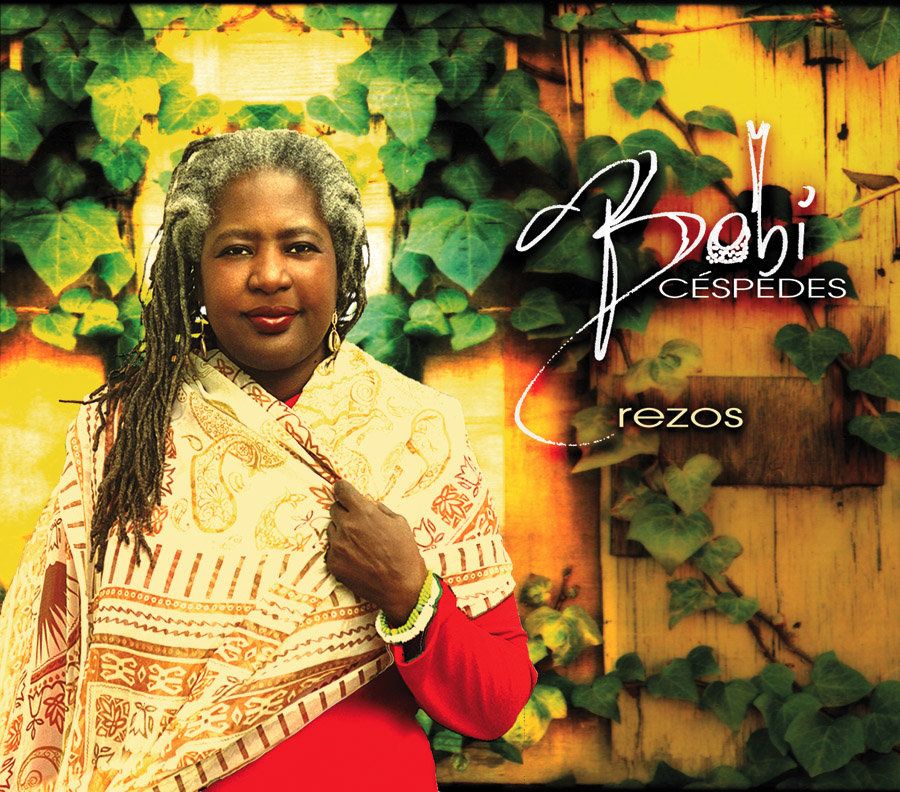