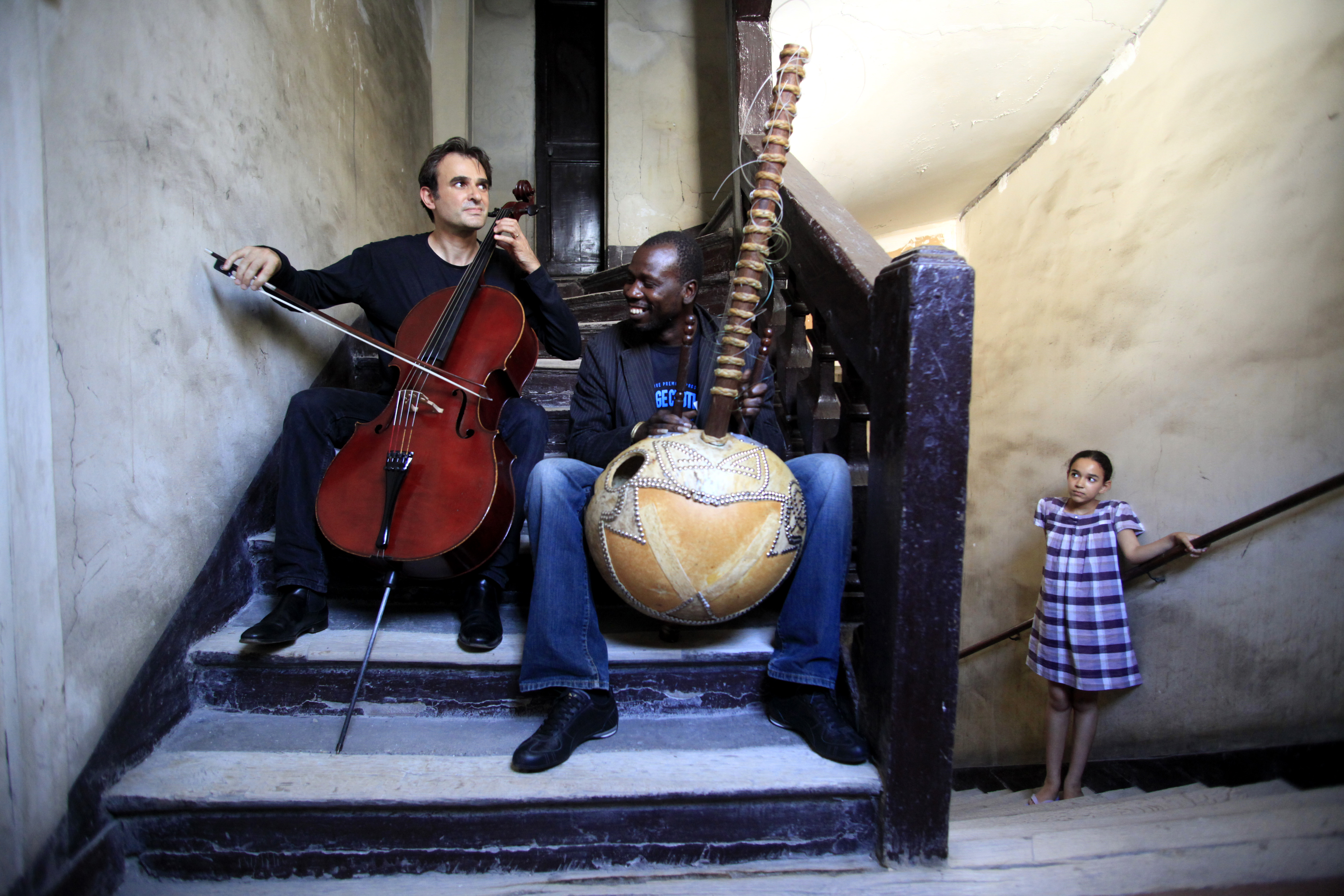 When Ballake Sissoko and Vincent Segal released their first collaborative album, Chamber Music, they caught the music world by surprise. Everything about this duo was unexpected: the Malian master of the traditional harp, or kora; the French cellist with the unlikely background in trip-hop; and the elegant, soulful music they made together. The album appeared on numerous best-of lists in both Europe (in 2009) and North America (in 2011). Now, these two sonic voyagers have returned with Musique de Nuit (“Night Music”) – an album which may not have the same element of surprise, but which may be even more spellbinding than its predecessor.

After years of touring together Sissoko and Segal have created their own hybrid tradition, one that draws on the ancient well of West African troubadour songs, the rich heritage of Baroque music, and an elusive but somehow clearly modern sensibility. Musique de Nuit refines their approach: where Chamber Music included several guests, most of this album consists solely of duets – though your ears may tell you different.

Much of this is due to Segal’s inventive cello playing, which can provide a percussive groove in the lilting opener “Niandou” or imitate the njarka, the Malian fiddle, in “Balazando.” The seamless way that he moves from one sound to another gives the illusion of several musicians playing at once. Sissoko, meanwhile, weaves a filigreed texture of sound from his kora, which is both a melodic and a rhythmic instrument. And while you’d never mistake this for a jazz album, it does share a spiritual kinship with the great album of duets made by Duke Ellington with bassist Jimmy Blanton, in the sense that it captures two musicians keenly listening to each other, and responding with an almost telepathic connection to each change of timbre or rhythm.

“It’s actually a bit husky, and raw,” Vincent Segal explains. “There are out-of-tune notes and fingernails crack sometimes, but there’s a sort of activity between us in those moments that I love.” The idea, he says, was not to try to re-create the sounds of a performance in a beautiful concert hall, but something much more personal and intimate; “I love listening to my musician friends at their places, in the studio between sessions, in the backstage area.”

Perhaps the most magical thing about Musique de Nuit is that after years of touring, and performing together on hundreds of stages around the world, the album has the feeling of eavesdropping on a late-night jam session. In fact, the album was recorded in two sessions in the Malian capitol of Bamako – one at night on Ballake’s rooftop, and the other during the day in the famed Bogolan studio. “We’ve always had this connection to the oral tradition,” Segal says, “and improvisation, and clarity of discourse.” Those deep roots give the album a timeless cast, as it moves between quietly beautiful nocturnes and lively, dance-based melodies. 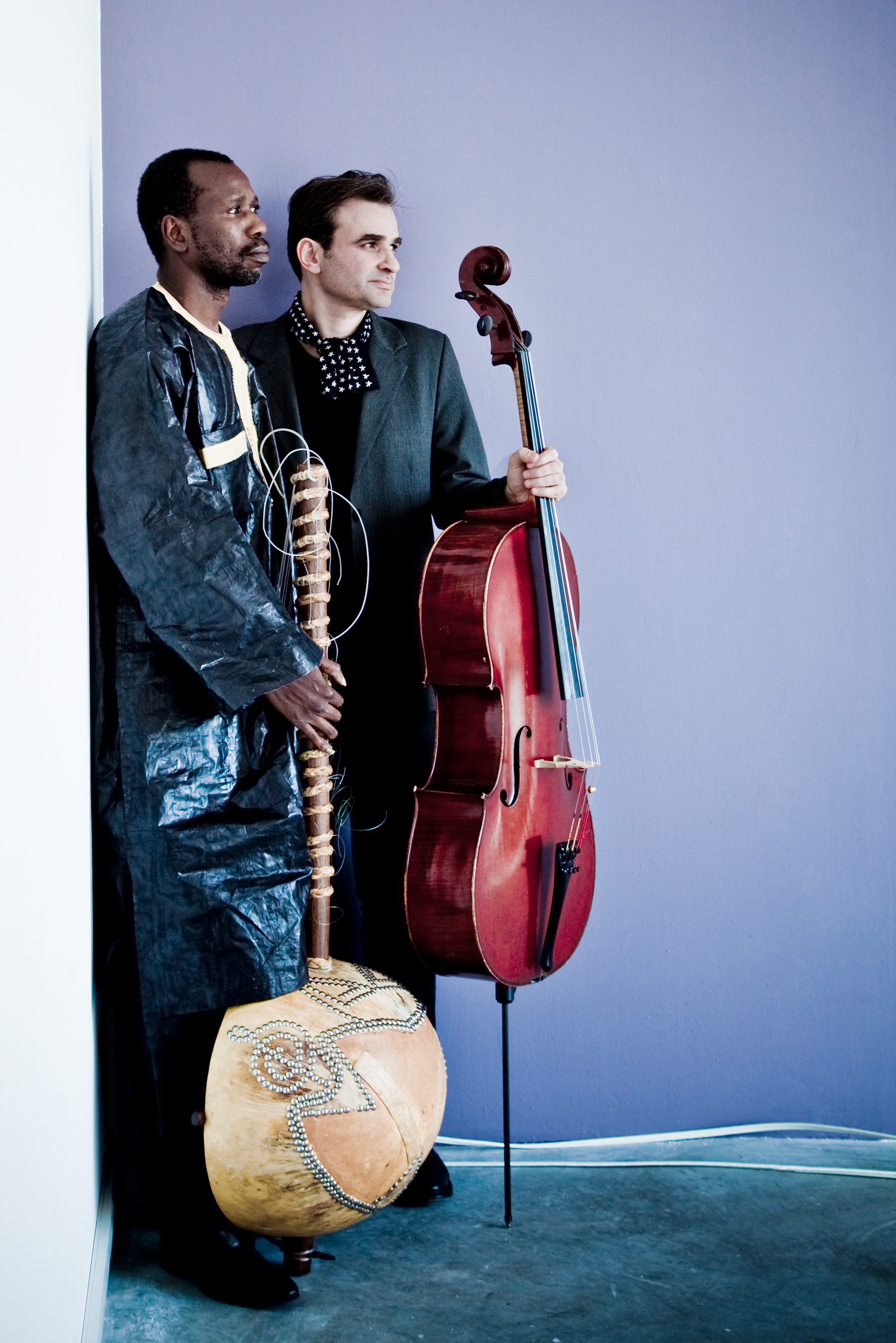 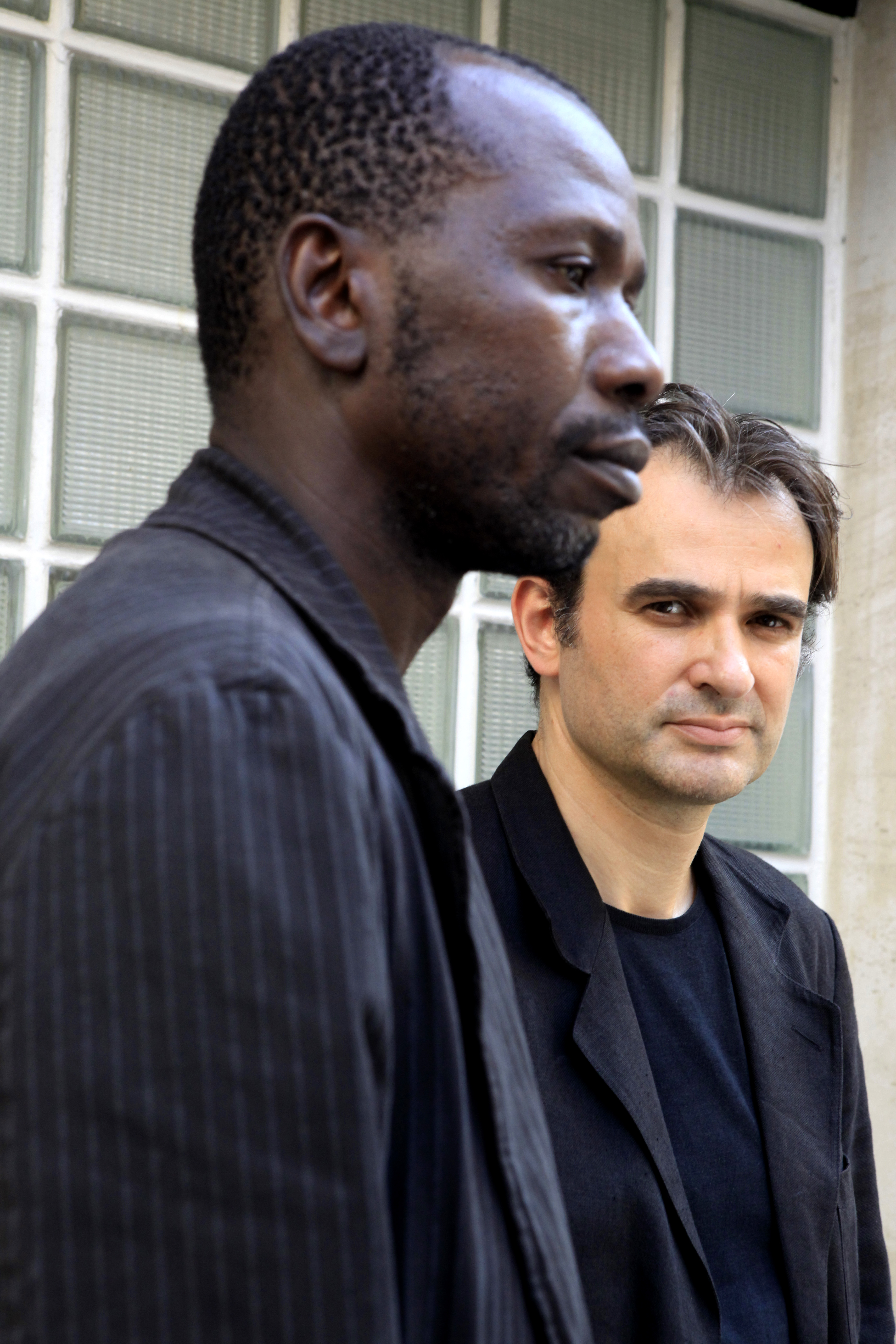 The album’s centerpiece is “N’kapalema,” a work built around a loping rhythm that suggests camels swaying across the windswept western Sahara. But this ancient image dissolves as the piece picks up momentum, leading to a second half that conjures up the bustling streets of modern Bamako. As Segal recalls, “we played this piece night after night in our hotel rooms, on tour. I’m proud of its grand nobility of style, particularly in the pizzicato dance and in Ballaké’s extraordinary groove.” The groove, though, is even stronger on “Super Etoile,” a song named after the band that launched the career of the Senegalese superstar Youssou N’Dour. “Super Etoile” is a reminder that the night can be a boisterous time. “For me,” Segal says, “that style, or mbalax, calls to mind those nights with my Senegalese friends in the Parisian suburb of Gonesse – it reminds me of parties, and the joy of dancing.” Here, the propulsive rhythmic interplay of cello and kora evokes Jimmy Mbaye, the lead guitarist in the Super Étoile de Dakar, and the moments where the cello soars over the top recalls the great Senegalese voices of Youssou, Thione Seck, and Baaba Maal.

Hot nights in Parisian clubs aside, much of the “night music” on this album is of a cooler sort. “Prelude” has a clear nod to the sounds of classical music and perhaps to the jazz pianist Bill Evans. “Passa Quatro” is dedicated to the Brazilian musician Ivan Vilela, and has echoes of the post-bossa-nova sounds of Vilela’s guitar-like viola caipira. And then there’s “Diabaro,” the only song on the album that features a guest musician. Here, Babani Kone contributes her distinctive vocals, bringing the sounds of traditional griot singing to an album that is largely a collection of songs without words. (The kora, though, is traditionally used to accompany the singing of the griots, or troubadours, of Mali.)

“Samba Tomora” uses the sounds of Minimalism and dance music to irresistible effect, and the album concludes with the title track, a spare, gentle tune that sounds like just what you’d expect from two friends, playing together under the stars on a rooftop in Mali. For Vincent Segal, whose background includes a fair amount of studio production, this whole record was an exercise in what he refers to as “field recording: no sound processing or anything like that. The idea was to lasso a moment of our life!”  Musique de Nuit captures those moments. And this time, the music world is ready for it. 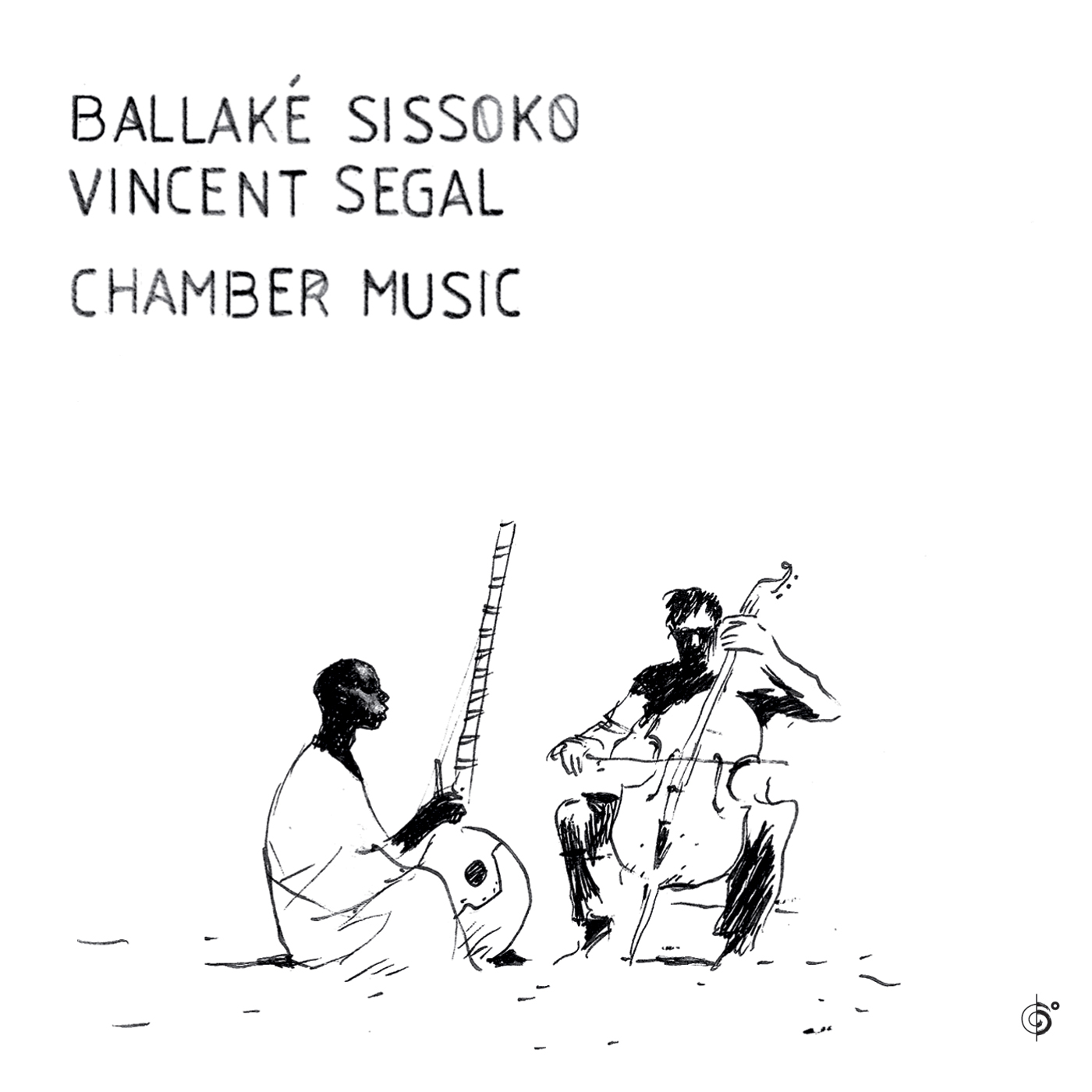 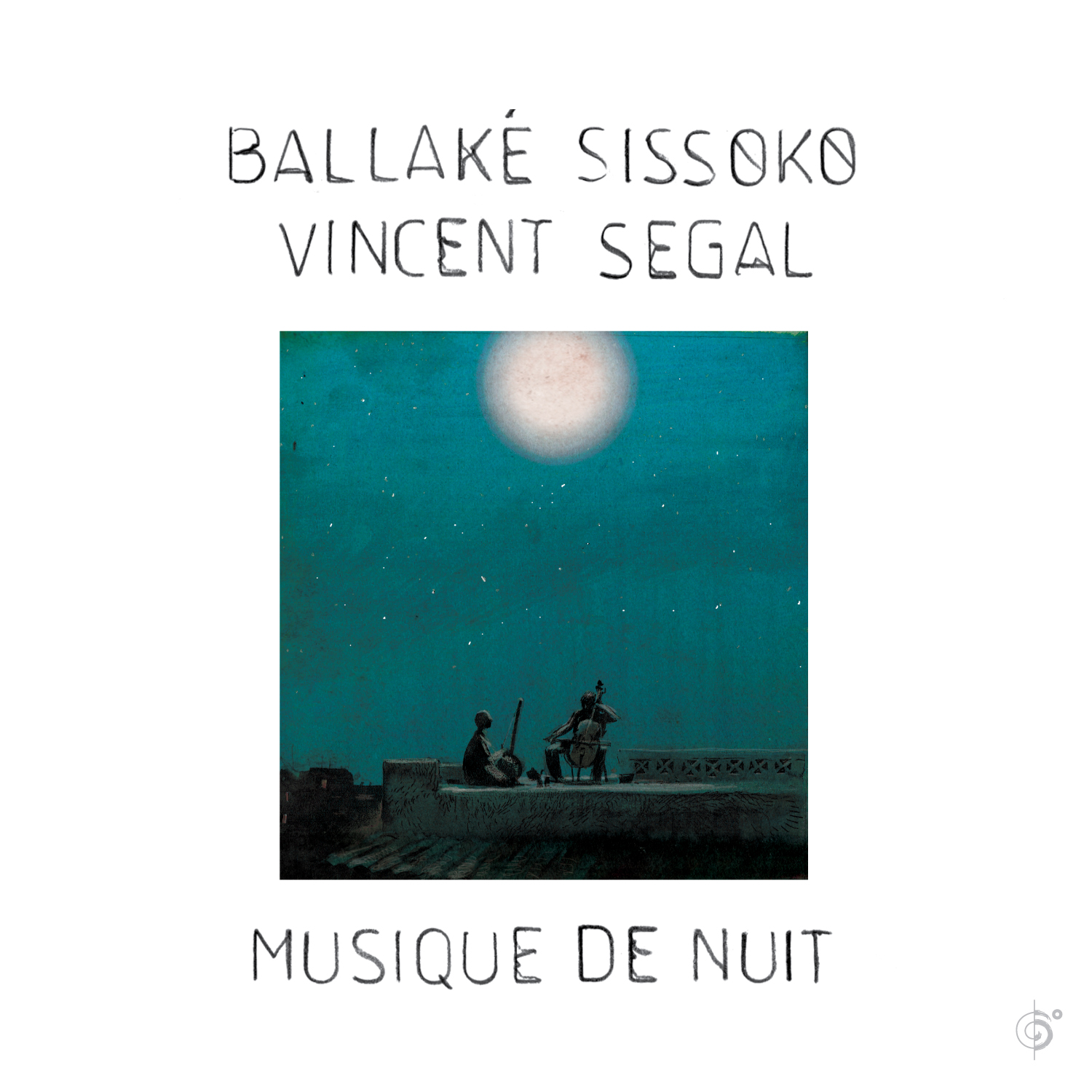